A downloadable game for Windows

Brave the darkness to find a way out, as well as explore the environment to find all the pieces of the story and try to figure out the mystery behind it all...

The player takes on the role of Lucy, who becomes trapped in a mine while searching for her wife. She has to find a way out, but also stay clear of the dangers that lurk in the dark.

To do this she must create light, both by activating old generators in the mine as well as using her flashlight. The flashlight runs on batteries, and Lucy needs to find these to make sure she always has enough.

Diversity - The game’s protagonist is a queer woman of color, which is rarely depicted in media, especially not video games.

Mythology - Inspiration for this game was taken from Filipino mythology which, despite its vastness, is not typically used in mainstream media the way mythology from other cultures is.

Atmosphere - Rather than using jumpscares to make this game scary, the focus is on atmosphere and giving players a sense of unease.

This is a project created during a 10-week long game development course at the University of Skövde, Sweden. Average playtime is about 15 minutes.

Really enjoyed the scares in this game! Love the story and atmosphere! Really well done!

Loved the atmosphere and creepy vibs of the game without being too dark. Having to carry items and stay in the light was a nice touch for tension. Looking forward to more from you in the near future.

too short, not enough scares. but the graphics are great. really dissapointed at how short it was.

I made a Let's Play of your game! As a Filipino, this was fun.

I love the atmosphere and how the story played out. There were a lot of bugs but that's okay. I like how you put a couple of Filipino folklore around the map and all the "sacrificial" areas where mindblowing. All in all, I really enjoyed it!

Graphics and the story found in the letters were really good but the overall execution was quite disappointing. Also I think my game was bugged because sometimes there were like "panic attacks" which haven't done anything to my character. That was weird. Anyway here's my plathrough (Polish language)

Just uploaded a video on your game with my friend and we loved it. The atmospheric was on point and certainly made the game so good, so nice work on that! And I also loved how you focused more on the atmosphere to scare us rather than relying on jumpscares. Too many games throw jumpscares in your face so I respect what you did with it. :)

You atmosphered the hell out of this game. It had me on the edge of my seat the whole way through. But the ending could've been a bit better. But overall It was fantastic. :D

looks nice, but optimized poorly. gpu temperatures spiked within just two minutes of launching the game and fan was running at full speed.

Reply
DemKi2 years ago(+1)
First of all, I love your game! However, the ending was kinda weak in my opinion. I made a full walkthrough on your game (with a short review at the end) Second, I'm planning on making a full review on the game :')
Reply
rtghd2 years ago(+2)

i just uploaded my gameplay of this, pretty cool! :D

An interesting game. The atmosphere was really good. we enjoyed it very much.

Here is a short video we made while playing:

Keep up the good work!!!
Reply
Lynxette2 years ago(+1)

I find it strange that the setting is underground. I mean sure a manananggal can use a cave system as a hideout but the typical stories are set in a village in the middle of a jungle or in far-flung barrios.

Hello! We were supposed to have more environments featured in the game, but given the fact that this was a university project and we had a strict time limit, we had to scrap those. There is however a reason why the story takes place in the cave (or more correctly, why the things Lucy experiences happen down there). Thank you for letting us know your thoughts!

I just have one criticism concerning the voicework.  As fun as it is watching foreign LP-ers mispronounce the national bogeyman, I think it would've been nice to hear the protagonist correctly pronounce Manananggal at least once or at least have the grandmother say it in a flashback.  The fact that people call it the Maw-naw-nawng-gull is just removing the immersion for the rest of us hahaha.

Hello! The protagonist pronouncing it that way was purposefully done, considering that she has lived outside of the country her entire life. The idea of her grandmother saying it during a flashback could've definitely worked, though! Thank you for the feedback!

Was a cool game but i encountered this pretty weird bug. Not sure how it happened but when i would go turn on my flashlight, there would be no light but when i would turn off the flashlight it would then turn on showing up on the bottom right corner of my screen lol. Overall thought it was fun to play even without light.

Hello and thank you for the feedback!

That is a bug which we never had the opportunity to fix, but: it disappears as soon as you reload the batteries in the flashlight. (It's weird, we know.) Our apologies!

So, a lot of this game was atmosphere. The setting was great, story was great, sound engineering was awesome. There weren't really any real jumpscares and that is something that not a lot of recent indie horrors can say! It relied a lot on atmosphere and inspiring real life phobias in the player's mind. The story was solid and definitely had me wanting more. I can definitely see a possible sequel! Thanks so much for making this!

I played though this game for a YouTube video, and I have to say it was a good experience, especially for a small project.

I didn’t quite understand what happens when it seemed like I was getting caught though?

i am a filipino and the word mananangal was a little bit wrong also their saying. But good game actually!

ive seen john play this game and was actually kind of excited when i saw it on my fb since it was suggested by a page i follow !

and i know & understand how time constraints kept you from explaining the game further but hopefully !! if you accept criticism of sort or just say, this is feedback ,, but i'd like to just say that the mining setting was really weird ( esp since this was set in philippines ), a more appropriate one esp for the manananggals would be dark forests ( even if its cliche, but it's more of them being flighty monsters - able to escape in the sight of danger ). and majority of them live as normal human beings during the day so , it's kind of weird. but aside for the weird lore , the game's good overall ! a different perspective would be good like, 3rd person due to a lot of competition that does the same fps thing.

also it'll be a nice touch to make the journals / texts in tagalog !

I really liked playing your game, it had some nice visuals especially for unity games and the atmosphere was pretty creepy. I was just a bit confused about the monster. Everytime it appeared I couldn't really see it (I just saw some black clouds in the background) and there was a point where I died (I'm not even sure if I died) even if I didn't see the monster.

All in all it is a really good horror game. :)

Oh wow, this is a better-looking Filipino Horror game than some of the other games I've seen so far.

What are the minimum requirements? Because I run a potato laptop (intel core i5 internal graphics, 4gb RAM, dx9)

This was a very cool game!  I thought the story and objectives were great :D

Amazing game! Somethings confused me like the "monster" that we only really see twice and the fact that it snaps my neck at random times! But the story behind it was great, the concept was amazing, execution was decent, could've been better but I ain't hating! Over all great game! Everyone should give it a shot!

Really solid game. The graphics are great and the voice acting is superb. I like that you used the atmosphere to create terror as opposed to constant jumpscares. Great job!

Nice game, I spent a good amount of time searching for the tanks, but I didn't find the wife...

Neat game. Very creepy and atmospheric. My only complaint is all the time I spent trying to find the second gas can :)
https://youtu.be/oFZci71-Ijo

This is an interesting game. I played uploaded. Hope to play a sequel or full game that delves into the full story.

This is a really well thought-out demo/showcase. I love the concept of the manananggal and I know several other southeast Asian cultures have similar legends. It's a rad creature that has its roots in religion, superstitions, and taboos. I think this game's story does a good job of conveying this through notes and little details.

Would have liked to have seen a little more, but it was an enjoyable play. Really like the concept.

Lovely game you've created here, it was a challenge finding those fuel canisters which I enjoyed it really added to the fear of the game, running from the mananagal and now also worrying I'd run out of batteries.

The rock tables (without giving it away) were pretty awesome too, they felt right at place and helped to weave a story without it feeling boring or forced.

This looks good. very unique and i love how you don't need to include the jumpscares i hate lol. I love being scared but not that way.

I enjoyed this game! I hope you continue the project becasue i can see this going really far! 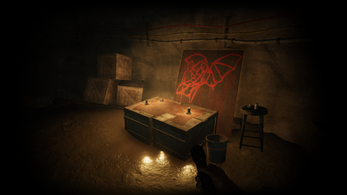 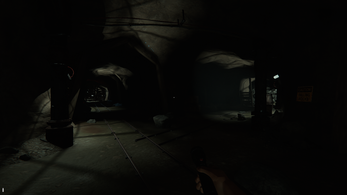 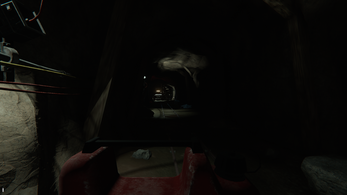